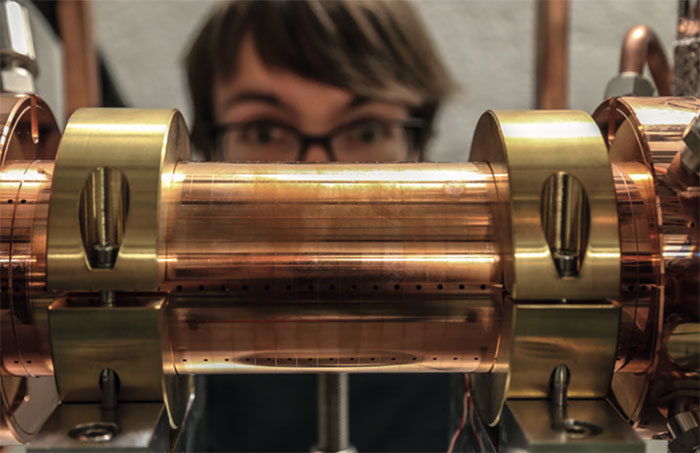 Advanced linear-accelerator (linac) technology developed at CERN and elsewhere will be used to develop a new generation of compact X-ray free-electron lasers (XFELs), thanks to a €3 million project funded by the European Commission’s Horizon 2020 programme. Beginning in January 2018, “CompactLight” aims to design the first hard XFEL based on 12 GHz X-band technology, which originated from research for a high-energy linear collider. A consortium of 21 leading European institutions, including Elettra, CERN, PSI, KIT and INFN, in addition to seven universities and two industry partners (Kyma and VDL), are partnering to achieve this ambitious goal within the three-year duration of the recently awarded grant.

X-band technology, which provides accelerating-gradients of 100 MV/m and above in a highly compact device, is now a reality. This is the result of many years of intense R&D carried out at SLAC (US) and KEK (Japan), for the former NLC and JLC projects, and at CERN in the context of the Compact Linear Collider (CLIC). This pioneering technology also withstood validation at the Elettra and PSI laboratories.

XFELs, the latest generation of light sources based on linacs, are particularly suitable applications for high-gradient X-band technology. Following decades of growth in the use of synchrotron X-ray facilities to study materials across a wide spectrum of sciences, technologies and applications, XFELs (as opposed to circular light sources) are capable of delivering high-intensity photon beams of unprecedented brilliance and quality. This provides novel ways to probe matter and allows researchers to make “movies” of ultrafast biological processes. Currently, three XFELs are up and running in Europe – FERMI@Elettra in Italy and FLASH and FLASH II in Germany, which operate in the soft X-ray range – while two are under commissioning: SwissFEL at PSI and the European XFEL in Germany (CERN CourierJuly/August 2017 p18), which operates in the hard X-ray region. Yet, the demand for such high-quality X-rays is large, as the field still has great and largely unexplored potential for science and innovation – potential that can be unlocked if the linacs that drive the X-ray generation can be made smaller and cheaper.

This is where CompactLight steps in. While most of the existing XFELs worldwide use conventional 3 GHz S-band technology (e.g. LCLS in the US and PAL in South Korea) or superconducting 1.3 GHz structures (e.g. European XFEL and LCLS-II), others use newer designs based on 6 GHz C-band technology (e.g. SCALA in Japan), which increases the accelerating gradient while reducing the linac’s length and cost. CompactLight gathers leading experts to design a hard-X-ray facility beyond today’s state of the art, using the latest concepts for bright electron-photo injectors, very-high-gradient X-band structures operating at frequencies of 12 GHz, and innovative compact short-period undulators (long devices that produce an alternating magnetic field along which relativistic electrons are deflected to produce synchrotron X-rays). Compared with existing XFELs, the proposed facility will benefit from a lower electron-beam energy (due to the enhanced undulator performance), be significantly more compact (as a consequence both of the lower energy and of the high-gradient X-band structures), have lower electrical power demand and a smaller footprint.

Success for CompactLight will have a much wider impact: not just affirming X-band technology as a new standard for accelerator-based facilities, but advancing undulators to the next generation of compact photon sources. This will facilitate the widespread distribution of a new generation of compact X-band-based accelerators and light sources, with a large range of applications including medical use, and enable the development of compact cost-effective X-ray facilities at national or even university level across and beyond Europe